Seeing and Settling the Prairie: Centering the Land in the American West 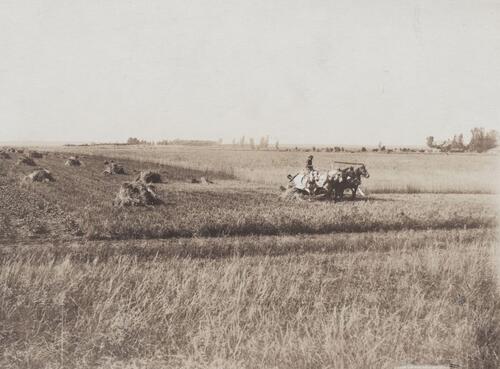 June 11, 2021
Visit exhibition here.
The historian Patrick Wolfe differentiates between colonialism and settler colonialism based on each system’s engagement with Indigenous peoples and with the land. Colonialism is characterized by the indispensability of colonized people to the colonial socioeconomic system. Settler colonialism, on the other hand, focuses its attention not on persons, but on the land, resulting in the dispensability of Indigenous peoples in the settled context:
“The primary object of settler-colonization is the land itself rather than the surplus value to be derived from mixing native labour with it. Though, in practice, Indigenous labour was indispensable to Europeans, settler-colonization is at base a winner-take-all project whose dominant feature is not exploitation but replacement […] invasion is a structure not an event.”
(Patrick Wolfe, Settler Colonialism and the Transformation of Anthropology: The Politics and Poetics of an Ethnographic Event, 163)
More recently, decolonial scholars such as Elizabeth Povinelli and Kathryn Yusoff have centered the land in their theorizations of colonial power. In both cases, it is a characterization of land as nonliving or less-than-human that provides a basis for the expansion of these categories to include non-human animals and, eventually, Indigenous and other colonized peoples. In short, the domination of land and the attitudes and ontologies that justify it are often the first step toward colonial domination writ large.
These observations are particularly useful as we think about the colonization of the American prairies in the nineteenth century. This is, in large part, because discourses of westward expansion were almost singularly occupied with land and farmers’ relationship to it. While the settlement of these lands by “pioneers” was predicated on labor—many of the deals made to secure land required sustained agricultural improvement and the very ethos of the move out West was centered around individualistic opportunities to “make it big” through agrarian or industrial work—, the focal point of many documents issuing from the period of expansion is not the work undertaken or the people doing it, but the land itself. In some imaginations, a beautiful, fertile land; in others, one utterly devoid of life (which is to say, void of human and, specifically, white male life). In each case, a distinct relationship is established between the farmer and the prairie (which would be tilled to become farm land), which allows, even compels the former to inhabit the latter. In each case, the land is as productive as a rhetorical object as it is a material entity.
In this exhibit, I examine documents in the Beinecke collections related to colonization of the prairies to understand how the land functions in these texts. Through an exploration of maps, photographs, and watercolor paintings, as well as publicity and recruiting materials issued by local governments and private companies, I understand the structure of the invasion of the land west of the Mississippi River by American settler colonists. This is present as discursive structure(s), effected via the glorification of the farmer and the depiction of a wild land that must be tamed. It is also physically significant, both as a cartographic strategy imposing property lines on otherwise not delineated land and as a process of technological expansion via rail and telegraph systems.
For all the complexity of the prairie, a lacuna in the archive (and indeed in cultural production) should catch our attention. There are very few artistic representations of prairie spaces in the national American canon. This may be an indication of the pervasiveness of the myth of prairie as desert or wasteland; there are, after all, Romantic landscapes of the Rocky Mountains from the period, indicating that well-known East Coast painters were willing to travel west. Regardless of the reason for this silence, we must note that, as a result, the majority of visual representations of prairies in the period come from regional artists, or artists traveling through the prairies, either on tours of some kind or as settlers themselves. The benefit of these sources is that they may give thee modern viewer a “truer” view of the prairie (or at least imaginations of it) from the source. On the other hand, many representations of the land were commissioned for materials explicitly oriented toward recruitment of settlers. As we navigate the documents present in the archive, we must be attuned to the various physical, imaginative, and rhetorical layers of the American Prairie as it was understood in the nineteenth century.

Exhibition curated by Abigail Fields, Ph.D. Candidate in the Yale Department of French.