The Road to Ruin: Bronx Frontier and the Harvest of Rubble 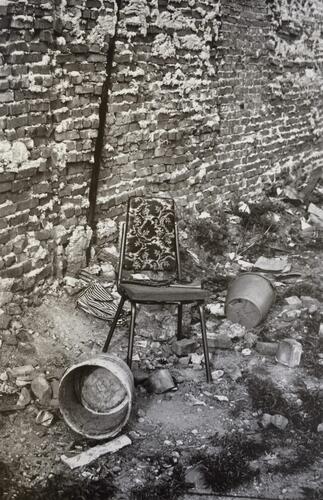 What’s in a road? This micro-exhibition considers the road as an object in its own right, mining the archive to ask what happens when it cracks and corrodes. The roads in question lined the South Bronx in the 1970s, during an era when governmental neglect and landlord abandonment left its physical infrastructure in a state of ruin. As the pavement breached, its dense layers of asphalt and concrete touched the air for the first time in decades, and the resulting debris collected in raw mounds pockmarking the Bronx.

In the wreckage, some spied opportunity. “One material in abundant supply in the South Bronx is rubble,” the Ford Foundation reported in 1980, championing an initiative to monetize the remains of abandoned buildings and byways. This micro-exhibition turns a spotlight on the forgotten organization, Bronx Frontier, which collected rubble from torched buildings and dilapidated roads and turned it into compost for gardens. The group’s call to “Green the Bronx” was controversial, evoking “planned shrinkage” policies that cut essential services in neighborhoods of color experiencing population loss. Featuring photographs and organizational ephemera, this exhibition offers an archival meditation on the politics of race in the nascent environmental movement. Visit the exhibition here.

Bench Ansfield, “The Broken Windows of the Bronx: Putting the Theory in Its Place,” American Quarterly