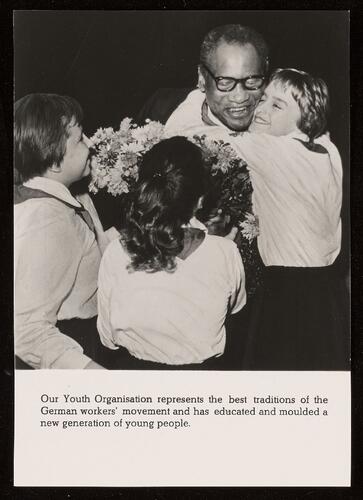 During the Cold War, Black communists, anti-fascists, fellow travelers, and radicals of all stripes in the United States were subject to heightened repression at the hands of the state. Many experienced surveillance, targeted harassment, blacklisting, and incarceration. Others without the limited protections of U.S. citizenship faced internment and deportation. Many fled the United States altogether, seeking refuge abroad in European cities like Paris and London, in communist countries like Cuba, China, or the Soviet Union, and in newly-independent nations throughout Africa. Whether this exile was permanent or temporary, such flight offered artists, activists, and intellectuals transnational perspectives with which to critique U.S. racism, nationalism, and imperialism. Travel abroad more generally allowed for new forms of engagement with the antiracist and anti-imperialist politics inherent in the Black intellectual and historical tradition.

In a world fundamentally transformed by the recent collapse of the Third Reich and the subsequent establishment of the Iron Curtain, divided Germany became an especially provocative site for travel and reflection. The Berlin Wall, constructed in August 1961, formalized this divide. This barrier looms especially large in U.S. cultural memory as a symbol of the Cold War writ large, the line between freedom and tyranny. In the West, the abrupt appearance of the wall was shocking, a gross human rights violation often referred to as a totalitarian “concentration camp wall.” In the East, by contrast, state officials designated the wall as an “Antifascist Protective Barrier,” working to keep out, rather than keep in, calcifying a total ideological divergence in proximity to its close neighbor.

Drawing on collections from the Beinecke Library and additional materials from the Friedrichshain-Kreuzberg Museum and the German Federal Archive, this exhibit explores Black radical encounters with the Berlin Wall and East and West Germany from the late 1950s to early 1970s. It showcases three acts of Black radical border-crossing in Cold War Germany, from Paul and Eslanda Robeson, Langston Hughes, and Angela Davis. This travel produced diverse meanings for each of these prominent thinkers, informing their Black internationalist perspectives on global Cold War politics and their revolutionary freedom dreams both at home and abroad. Go to the exhibition.