I best not linger here: James Baldwin in Birmingham, Alabama 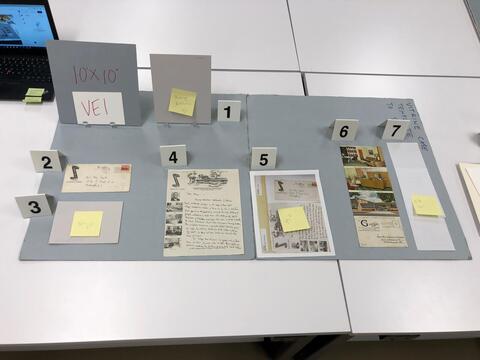 In 1957, just weeks after President Eisenhower signed the Civil Rights Act into law, African American writer James Baldwin (1924-1987) traveled in Georgia and Alabama, meeting with black and white Americans involved in shaping the modern civil rights movement. At the age of 33, Baldwin had already traveled widely in Europe, but the native New Yorker had never visited the American South. After meeting Reverends Martin Luther King and Ralph Abernathy in Montgomery, Baldwin traveled to Birmingham. He wrote to his friend, Mary Painter, about the physical strain of all his travels—sleeplessness, headaches, a barely controlled sense of panic. He described meeting a civil rights activist preparing to leave the city because he “can’t take any more burning crosses.” Baldwin continues, “I have a very strong feeling I best not linger here. …I’ve never in my life been on a sadder journey…” Baldwin’s letter was written from the A.G. Gaston Motel, run by an African American entrepreneur in the segregated city. In 1963, the Gaston Motel became the headquarters of Martin Luther King’s consequential Birmingham protests; in room 30 of the motel, King planned to march with his followers in defiance of an Alabama Circuit Court injunction against civil rights protests. After his resulting arrest, King wrote one of his most vital and imperative statements of the movement: “The Letter from a Birmingham Jail.” In 2017, the Gaston Motel became part of the Birmingham Civil Rights National Monument.  James Baldwin’s essays about his trip through the South were published in magazines including Harper’s and The Partisan Review; they were later collected in Nobody Knows My Name: More Notes of a Native Son, 1961.

Photo by CVV to be printed by studio

Letter to Mary Painter (Paged) with reproductions of rectos and envelopes 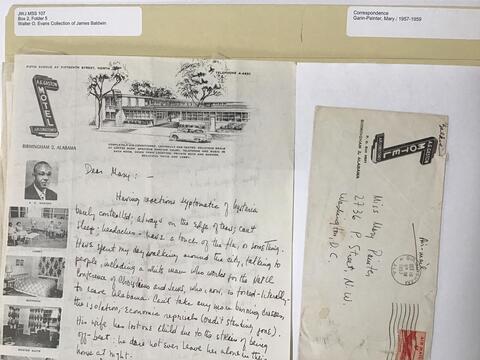