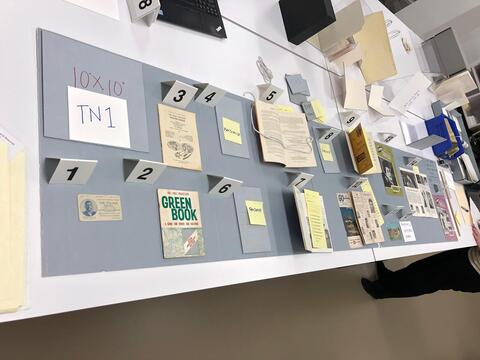 Before the Civil Rights Act of 1964 outlawed discrimination based on race or skin color, African American travelers faced both indignity and danger on the road. So-called Jim Crow Laws supported racial segregation on public transportation and in restaurants and allowed hotels to legally deny African American travelers accommodation. By the middle of the 20th century, a growing black middle class had money to buy automobiles and take holiday road trips; driving their own cars allowed African American travelers to avoid segregated trains and buses, but they still faced uncertainty and risk. Victor Hugh Green, founder of Negro Motorist Green Book, was among those who created travel guides to eliminate, as A. B. Stewart’s 1940 guide states, “much, if not all, of the embarrassments, humiliations and inconveniences encountered while traveling.” Travelers relied on such guides to identify safe and friendly rest areas, attractions, and accommodations. Some guides highlighted businesses owned by African Americans and noted when they were unable to assemble a list of friendly businesses in a given region because “’established customs’ prevented our scouts from obtaining much information.” African American travelers found additional resources to support their wanderlust, including magazines such as The Negro Traveler, which included segments advocating for desegregation in the South and discussing other political matters of interest to travelers, alongside travel-related fashion and style features.

A. B. Stewart’s Guide

Fiesta Motel postcard and scan of back