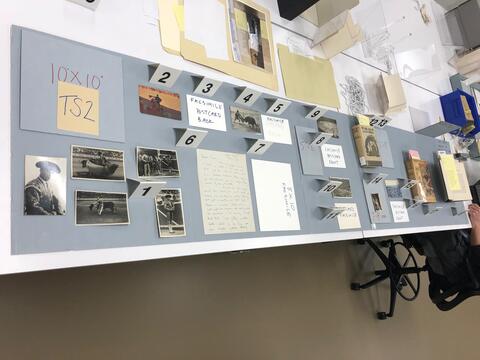 In the early 1920s, novelist Ernest Hemingway (1899-1961) made annual trips to Pamplona, Spain, for the San Fermin festival, a yearly celebration highlighting the history and traditions of bull fighting. In his early 20s and recently expatriated to Paris, he was captivated by the life and death drama of the bull fights and the bravery of the matadors. For one week each summer, Hemingway and friends—including fellow writers—attended festival events like the now-infamous “running of the bulls” and daily bull fights.  Hemingway’s first novel, The Sun Also Rises (considered by many to be his best work), was inspired in part by his experiences at the July 1925 San Fermin Festival. One section of the novel depicts the complex social and romantic interactions of a group of young people in Pamplona, the energy and turmoil of the festival serving as a backdrop to the group’s lively, drunken escapades and sometimes-painful entanglements. Though he’d been planning to write a nonfiction book about bullfighting, Hemingway instead feverishly drafted his novel—under the working title Fiesta—over the course of just two months; the book was published with its new and abiding title in 1926. A few years later, Hemingway returned to the idea of writing a factual account of the Festival; his book Death in the Afternoon was published in 1932.

In letters and postcards to his close friend writer Gertrude Stein and her partner Alice B. Toklas, Hemingway describes the 1924 San Fermin festival, including his participation in the novillada, when novice and amateur bullfighters fight immature bulls. On a photo-postcard of such an event, Hemingway has identified himself and his friend (Hemingway is marked with the #2 and writer Donald Ogden Stewart is #3). In a July 9 letter, he notes “I am getting a little better control” and tells of being “cogida” or tossed in the air by the bull.

Hemingway and Friends at July 1925 Fiesta of San Fermín in Pamplona, Spain, after which Hemingway almost immediately started writing The Sun Also Rises. Individuals pictured served as inspiration for the characters in novel: (left to right):  Ernest Hemingway is himself the basis for the narrator, ”Jake Barnes”;  Harold Loeb becomes  “Robert Cohn”;  Lady Duff Twysden  is the inspiration for “Lady Brett Ashley”; Hadley Hemingway, the novelist’s first wife (who is not included in the novel); Donald Ogden Stewart (partly hidden) is the prototype for “Bill Gorton”; and Patrick Guthrie, Hemingway’s “Mike Campbell.”

Death in the Afternoon – 3 copies 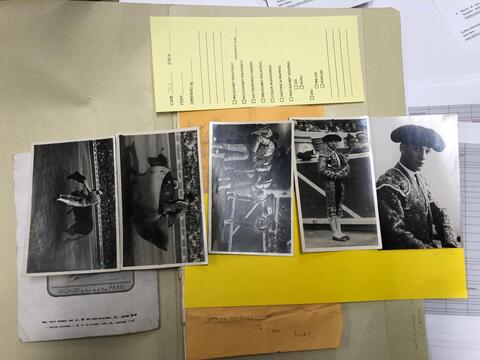