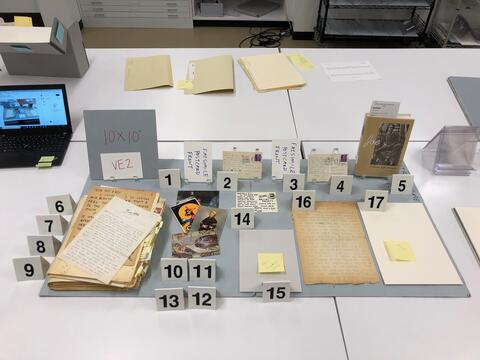 In the mid-1960s, American writer and artist Joe Brainard (1941-1994) traveled in Europe, often crossing paths with other American writers at readings and gatherings. A detailed record of Brainard’s travels is documented in frequent letters and postcards sent to his oldest friends, poet Ron Padgett and is wife Pat. Because Brainard’s correspondence includes reminiscences, inside jokes, and personal notes alongside reports about sights seen and people encountered, the correspondence reveals the close relationship of the correspondents as well as the traveler’s itinerary. The three had all grown up in the same neighborhood in Tulsa, Oklahoma, and moved together to New York City as young adults; Brainard remarks in one letter that he finds it impossible to write to anyone but Ron and Pat. Decades later when Ron Padgett was writing Joe: A Memoir of Joe Brainard, he returned to Brainard’s letters. As a researcher in his own papers, Padgett recorded information on yellow post-it notes used to mark important passages as he employed the letters and postcards to reconstruct Brainard’s trip and illuminate the long friendship the writers shared. In the Ron Padgett Papers at the Beinecke Library, the many folders of correspondence from Joe Brainard are now part of multiple records and stories—they document a trip and a friendship, a writer’s research and writing process when creating a personal memoir, and a library’s practice of collecting and preserving evidence of creativity and process – including Padgett’s arrangement of letters received and his research notetaking.