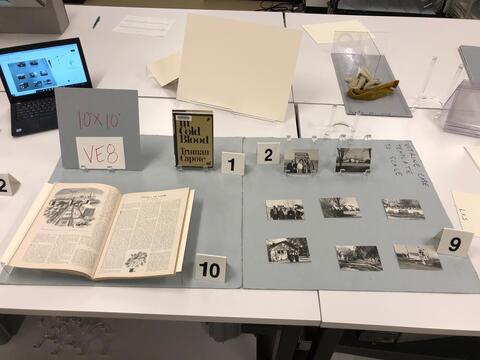 Writer Truman Capote (1924-1984) traveled to Holcomb, Kansas, in 1959 after reading in the New York Times about the murder of four members of the Clutter family in their home in the rural farming community. Capote was accompanied by two friends, fellow novelist Harper Lee and Sandy M. Campbell, a fact checker at the New Yorker. Capote’s aim was to research the case, interview the investigators and others in Holcomb, and write about the crime and investigation. In Cold Blood, initially published as a four-part series in the New Yorker in 1965, was called a “non-fiction novel.” Though he employed conventions of novelistic writing, Capote claimed the work was completely true; quotations, he said, came directly from his interviews. Nevertheless, many have questioned the reality of Capote’s work and his use of creative license to imagine unknowable details. Capote’s involvement with law enforcement officials and with the men ultimately convicted of the crime, some speculate, may have colored the stories they shared with the writer. Snapshots Sandy Campbell took during his trip to Holcomb with Capote and Lee show the two writers with Alvin Dewey, the lead detective on the case from the Kansas Bureau of Investigation, along with his wife. Photos from the trip include images of the travelers and their hosts posing tourist-style around town and outside the Clutter home, where the crime took place.

Truman Capote, In Cold Blood, New Yorker, September 1965;  In Cold Blood: A True Account of a Multiple Murder and its Consequences, New York: The Modern Library, 1965; photographs from the Donald Windham and Sandy M. Campbell Papers, 1959 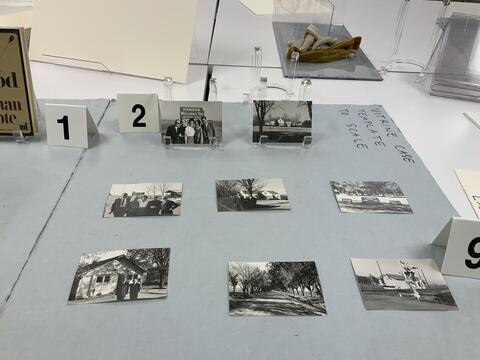